Biofilm is a slimy and gluey substance that Borrelia Burgdorferi generates to shield itself from antibiotics and the immune system. Borrelia can also hide in other microbial's biofilm and vice versa.  Fibrin, a protein our bodies create for blot clotting, is the basic building material used for generating a biofilm. A biofilm is designed to adhere to human tissue where damage to the tissue and inflammation occur.
Within the biofilm, Borrelia is capable of talking with its own species or other bacteria and carrying out offensive actions. Borrelia can also receive and swap genetic information such as drug resistant genes. Its reproduction cycle, given that it's every few weeks, can yield drug resistant strains in only a few generations. This could explain why years of antibiotics can't rid the infection. 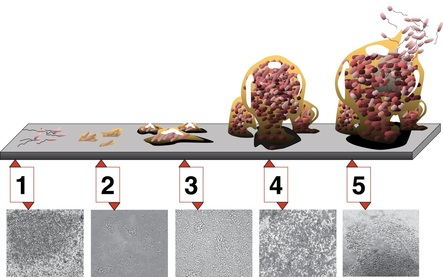 The professional opinions of treating biofilms themselves along with the bacteria responsible for Lyme Disease are split. However, the prevailing opinion from the best and most knowledgeable Lyme doctors is that biofilms should be addressed.

The Potential for Relapse

Because the bacteria responsible for Lyme Disease and its coinfections can obtain protection from not only the immune system in a biofilm, but antibiotics as well, there exists the potential for a person to relapse even after extensive antibiotic therapy.

"This video demonstrates the normative biological state of Borrelia Burgdorferi, a biofilm community."