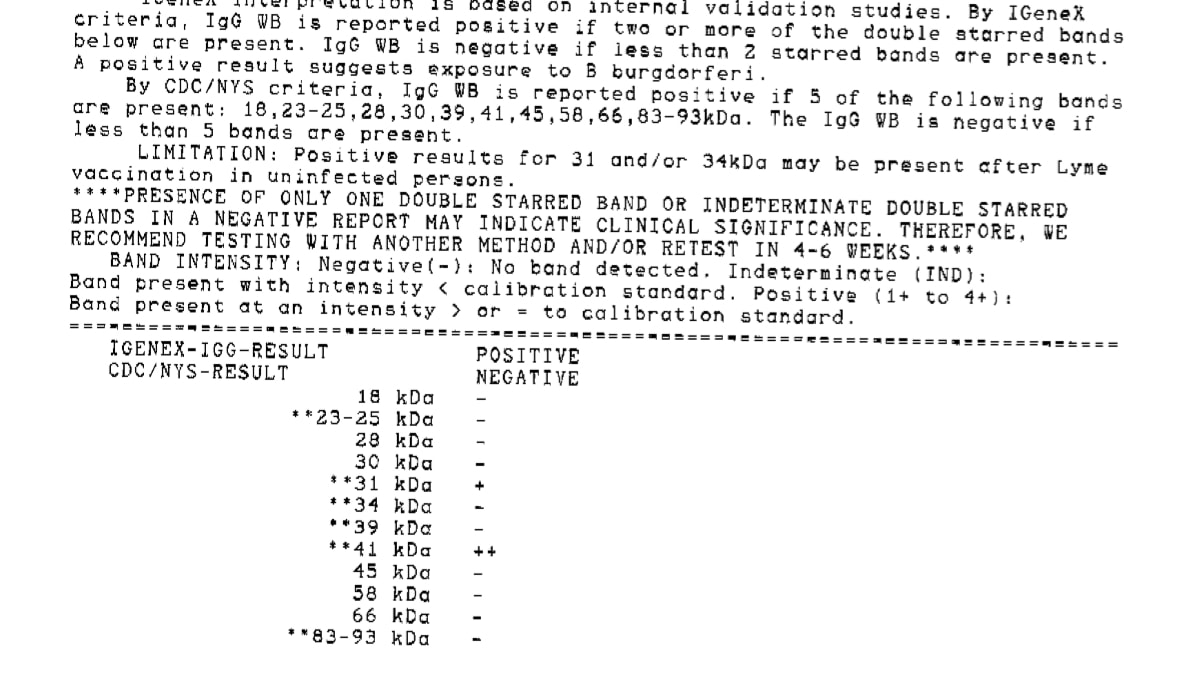 Depending on which study you consult, the current tests used to diagnosis Lyme disease are accurate only between 50-80% of the time, even with the best labs. IGeneX themselves, the most used and trusted lab by Lyme doctors and physicians for confirming a Lyme disease diagnosis, says, "Diagnosis should not be made on laboratory tests alone".
“It is important to note that a positive IgG and/or IgM Western blot only implies exposure to B. burgdorferi. It is only part of the test battery and is not confirmatory for Lyme disease. It does not mean the patient has Lyme disease; that is a clinical diagnosis.” -IGeneX source, 1998.
This exact current-day inaccuracy of Lyme testing in why the best Lyme physicians know not to rely upon laboratory testing for confirming a Lyme disease diagnosis solely, but to couple it with symptoms the patient experiences, and circumstantial evidence. It should be noted that there are labs out there that employ more advanced and modern techniques than others to increase the odds of obtaining a Lyme diagnosis. This article will talk about that later.
You’re feeling great one day, but on that same day you’re feeling good, you locate a tick behind your ear. The next day you’re in bed with a fever and a debilitating headache. It’s got to be something the tick transmitted, right? And it has to be Lyme disease because the symptoms say so.
Instead of waiting for your doctor’s appointment which is 2 days away, you take the initiative and head to the emergency room of your local hospital. By the by, it’s important to know that an emergency room, even the best in the world, can test you for Lyme disease and receive a negative result, even if you truly have Lyme disease because no Lyme test is currently 100% accurate.
You’re lying in the hospital bed with an extreme headache, the emergency room doctor tests you for Lyme disease, and after what seems like the world’s longest hour, your test results come back and they’re negative. Now, the emergency room doctor could then have easily dismissed Lyme as the cause of your debilitation symptoms and fever, but this is no ordinary emergency room doctor. He’s still calling for Lyme disease, and not because the test used may have been inaccurate, which it could have been and he should know that, no - he’s calling for another Lyme disease test but this test will check for a different species of Borrelia - Borrelia miyamotoi. You wait another hour, and the test comes back positive - you have your cause.
Aside from the inaccuracies that already plague even the best Lyme disease tests to date, they may only test for a certain kind of Borrelia specie. In the United States, most standard Lyme disease tests are only looking for Borrelia burgdorferi. In Europe, most standard Lyme tests are only looking for Borrelia garinii. To date, there are around 18 discovered species of Borrelia with attention focused on a select few.

Not all labs for pathogen testing are the same, which means not all tests, in this instance, the western blot test, are the same. The western blot test is the most commonly used method for testing for Lyme disease. It tests for antibodies your immune system produced in response to the presence of Lyme bacteria. A western blot test performed at one lab can have a completely different protocol and technique for identifying Lyme antibodies than another lab performing a Western Blot test as well.
Having more modern and advanced techniques for testing for Lyme disease can increase the odds a person will receive a positive diagnosis if they do in fact have Lyme disease.

Reason 3: The Type of Test Used

There are quite a few methods for testing a person who is suspected of having Lyme disease. The most common testing methods for testing for Lyme disease include looking for the bacteria’s DNA in the blood (PCR or polymerase chain reaction), looking for antibodies the immune system produces in response to the Lyme bacteria’s presence (ELISA. or enzyme linked immunoassay, or western blot or western immunoblot), or looking for the bacteria itself (culture testing).
While these testing methods for Lyme disease can confirm a positive diagnosis, they can also yield negative results time and time again, even if a person truly have Lyme disease. The following information explains why the following types of tests can come back negative even if a person has Lyme disease:
PCR Test: This test looks for the presence of the Lyme bacteria’s DNA in blood to confirm a diagnosis. Your blood sample may not have any Lyme DNA in it because when Borrelia is in its cyst-form, it rarely releases any. Also, people with Lyme disease have periods of time where they are more or less symptomatic or asymptomatic, which is reflective of the bacteria’s activities. The PCR test can come back positive or negative depending on the activity level of the infection.
Antibody Test (Western Blot & ELISA): This test looks for antibodies the immune system produces after it comes into contact with the Lyme bacteria. This is the most commonly used method for testing for Lyme disease to date, and it works great if antibodies are being produced. Unfortunately, more times than not, a person can have Lyme disease, but no antibodies are being produced, which will produce a false negative (i.e., a person will test negative for Lyme even though they have it). There are many reasons why antibodies aren’t being produced when a person has an active Lyme infection, and here are a few:
The current inaccuracies of Lyme disease testing is why any good Lyme doctor or physician will also take into account the symptoms a person suspected of having Lyme disease has, with laboratory testing, in order to make a clinical diagnosis.

Reason 4: You Don’t Have Lyme Disease, but a Co-infection

If you, or someone you know, has a Lyme test performed and it comes back negative despite the empirical evidence of notable Lyme symptoms, and every other common protocol test for other diseases and ailments has been performed and yielded negative results, continue to consider the possibility that you may still have an active Lyme disease infection.
And even if your doctor tells you you’re negative for Lyme disease, but in your heart you still know it to be the case, find a doctor who knows the ins and outs of Lyme disease. But also be wary of doctors who claim to know how to treat Lyme disease, or accept chronic Lyme disease as reality, but are just in the practice for a quick, large buck.
Remember, just because Lyme tests aren’t 100% accurate, doesn’t mean they can’t be in any way accurate. It’s all about discretion of circumstantial evidence. If you have symptoms of Lyme disease and your lab results come back positive, have good reason to assume you have Lyme disease. If you have symptoms of Lyme disease, and your fifth test comes back negative also, still don’t rule out the possibility of Lyme disease. This article is in no way suggesting a complete avoidance of Lyme testing. What it suggests is to not have 100% complete trust in a Lyme test, especially when no Lyme test is claimed to be 100% accurate.